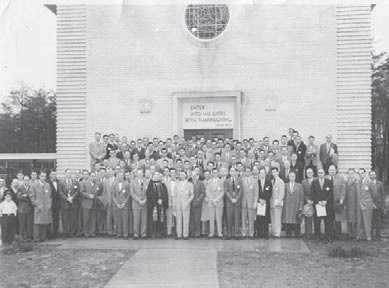 Greenbelt Community Church was the Protestant congregation formed when Greenbelt was established as a New Deal planned community in 1937. When the government purchased land to build Greenbelt, it used quotas to ensure religious diversity in the new community. The religious make-up of Washington, D.C. was used to decide the quotas for Greenbelt - 60 percent Protestant, 30 percent Catholic, 7 percent Jewish, and 3 percent other religions. The government did not build any houses of worship, reasoning that the U.S. Constitution guaranteed the separation of church and state.

Pioneer families worked hard at achieving religious tolerance and mutual respect, and social justice. They formed a Permanent Conference on Religious Life in Greenbelt, which continues today as the Greenbelt Interfaith Leadership Association.

In 1968, Greenbelt Community Church and St. Hugh’s Catholic Church hosted 700 members of the Poor People’s March on their way to Washington, D.C. Over 150 volunteers provided food, medicine, and cots to the marchers. 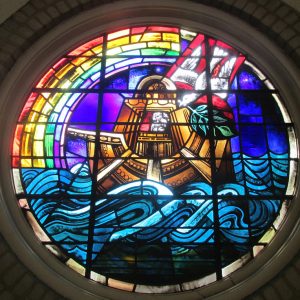 Story of The Stained Glass Window

The circular stained glass window in the front of our church is dedicated to the memory of Arja F. Morgan. His daughter, Ruth Morgan Raffaeli, wrote a remembrance for us in 2004, so we would know about the man whose memory the window is dedicated.

Mr. Morgan was born in West Virginia in 1889. He was seriously wounded in World War I in France and lay bleeding in a cold rainy field for three days and nights before he was found. Mr. Morgan was given up for dead, wrapped in a sheet, and piled with corpses in a field hospital. Revived by the warmth of the room Mr. Morgan moaned and was then found to be alive.

After meeting and marrying his wife, the Morgans moved to Akron, Ohio, to work at the Firestone Tire and Rubber Company, and had two children. Later the family moved to South Texas to farm. The Depression and crop failures brought the Morgan family to Greenbelt in October 1937, and Mr. Morgan became a guard at the Treasury Department until his untimely death from a heart attack in May 1944.

Mrs. Raffaeli wrote that Mr. Morgan would be pleased to see the Dove of Peace that is the focus of the window. He loved his family, nature, and growing flowers and vegetables. The expression in his eyes made him look as if he were always smiling, she wrote, and that the window is a beautiful and gratifying reminder of how much he loved life. 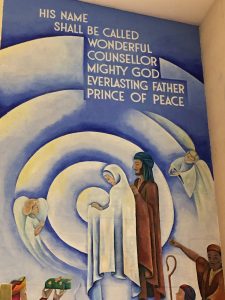 About our Chancel Mural

The Greenbelt Community Church United Church of Christ (GCCUCC) welcomed former member Robert A. Love last Sunday for the rededication of the chancel mural that was painted in 1952 by his mother, Elizabeth Love. Last week’s rededication of the mural celebrated the completion of a cleaning and color restoration project that began in March 2014.

The 20 by 12 foot mural presents a nativity scene of Christ Jesus, Mary, and Joseph, with shepherds, wise men, and angels. Wording at the top of mural is taken from the book of Isaiah in the Old Testament, “His name shall be called Wonderful Counselor, Mighty God, Everlasting Father, Prince of Peace.” In the original dedication of the mural on July 27, 1952, Elizabeth Love said that the nativity theme was chosen to “keep alive in the minds and hearts of this congregation the invincible position of the family.”

Robert Love was in high school when the mural was done, and is pretty sure his mother used him as a model for one of the shepherds in the mural, and he remembers his father, Leland Love, posing for the shepherd with the outstretch arm pointing to the baby Jesus. Other members of the church wore costumes from the Christmas pageant for the wise men in mural.

“One of the fundamental requirements of a mural is that it be in keeping with the style of architecture it embellishes, “ said Elizabeth Love at the 1952 dedication. “This building (the Community Church) shows the fundamental values of traditional church architecture in its simplest form, so this painting shows the essential elements suggesting the traditional characters of the theme, leaving the rest to the imagination.” In her remarks we see that it was a true cooperative effort, as she recognized numerous individuals for their efforts, from the scaffolding, to mural models, to the prep work on the wall. She also recognized the background painting and lettering completed by church trustee Beverley Fonda, who was the art director at the Johns Hopkins Applied Physics Laboratory. Those who have visited the church, and descended the stairs into the social hall, will note a sample piece of mural art painted by Elizabeth Love in 1952 to test the paint and color intensity.

The unveiling of the original mural was featured in the Washington Post on August 9, 1952. The reporter noted that Anthony Ferrara, the architect who designed the church, endorsed the mural design. The Post article also mentioned that the congregation numbered 760 individuals at the time of the mural creation. Elizabeth and Leland Love moved away from Greenbelt in 1961, when Leland’s government job was transferred to Ames, Iowa. Robert Love now serves the vice president for academic affairs at the ICI International Office in Irving, Texas. He has taught courses in astronomy, physics, chemistry, Bible theology, and education. Robert and his wife, Helen, still call Greenbelt “home.” It was noted during Sunday’s dedication that Robert’s served as best man at the wedding of Ed and Mary Ann Halley, who celebrated their 60th anniversary on Sept. 8 and are active GCCUCC members.

In 2014, Church trustees selected Washington, D.C., artist Alison Spain for the cleaning and painting assignment. Spain is a large format and large-scale mural artist whose work engages both the physical and the cultural landscape. “It was an honor to work on such a significant interior mural,” said Spain at the rededication. “I sought to preserve the original color palette, including the background that needed some extra attention to intensify the original elements of the design.”

Love said that his mother felt that the mural was the major highlight of her career, “displaying real religious significance in an appropriate design. Friends, this is your mural, designed and painted specifically for this congregation.”

While the mural was being restored in the sanctuary, members of Greenbelt Community Church worked on a mural in the Fellowship Center. Designed with the input of church youth by Michael Grindstaff, members painted the mural and as a finishing touch, left their fingerprint as a leaf in the tree. 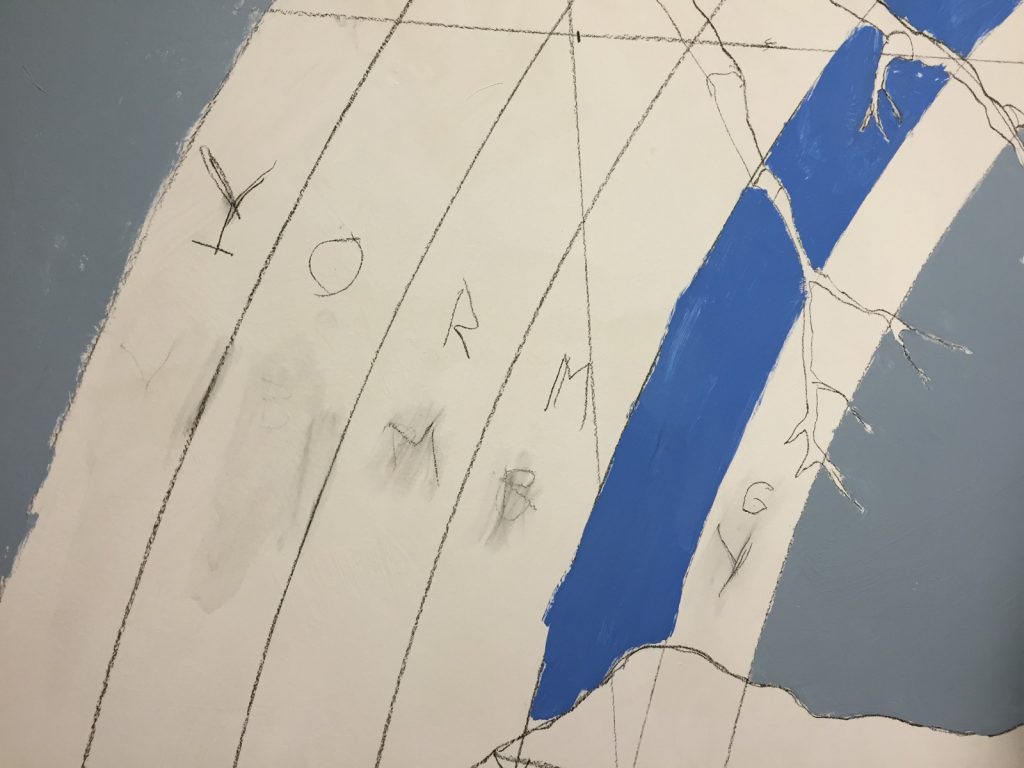 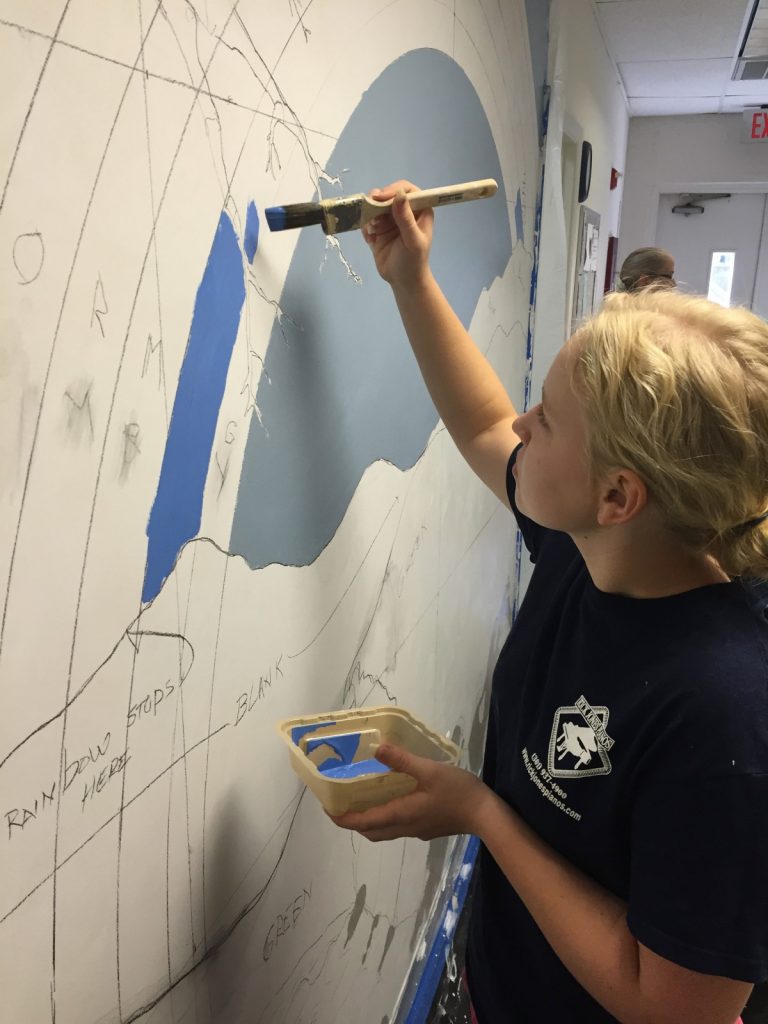 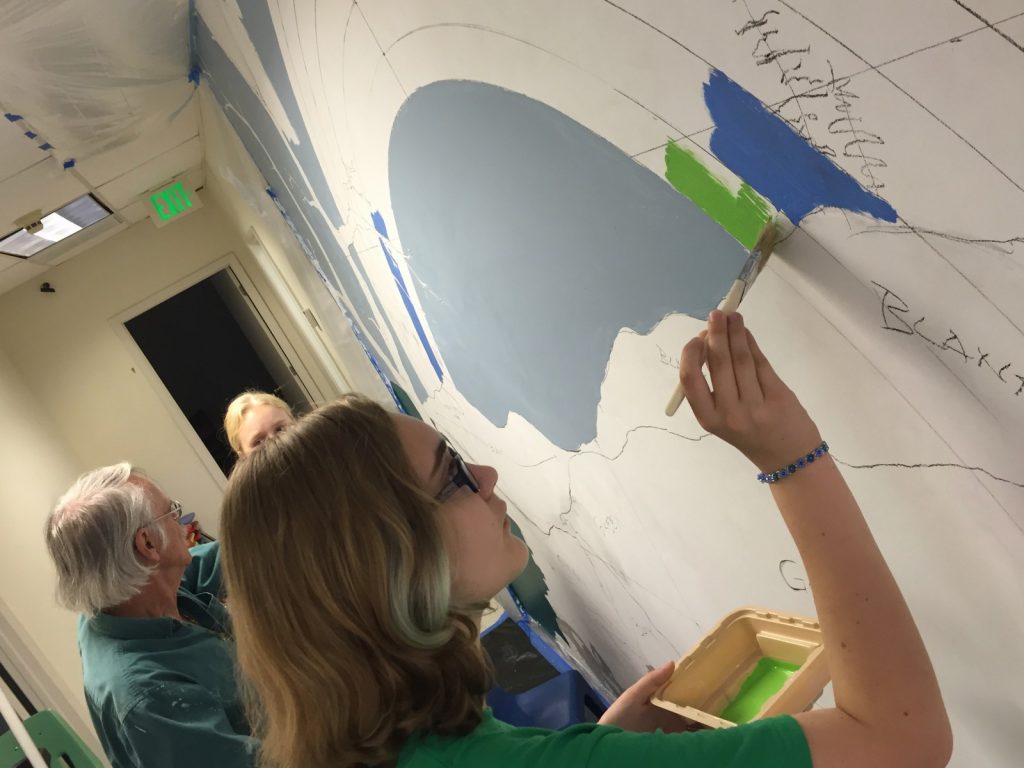 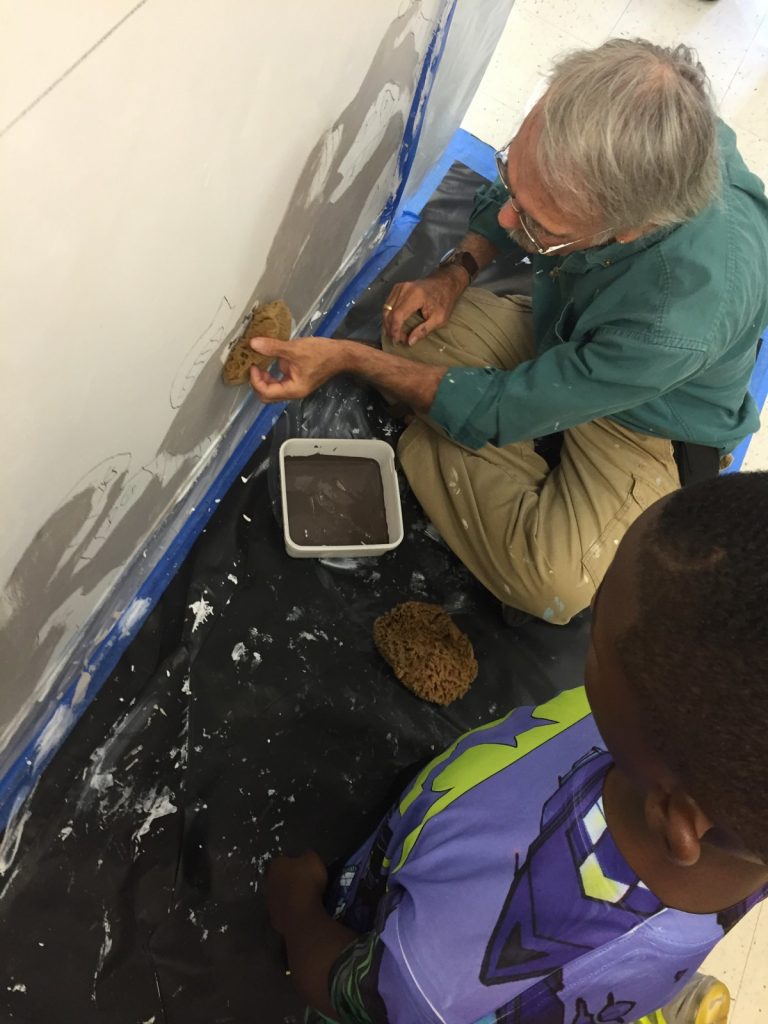 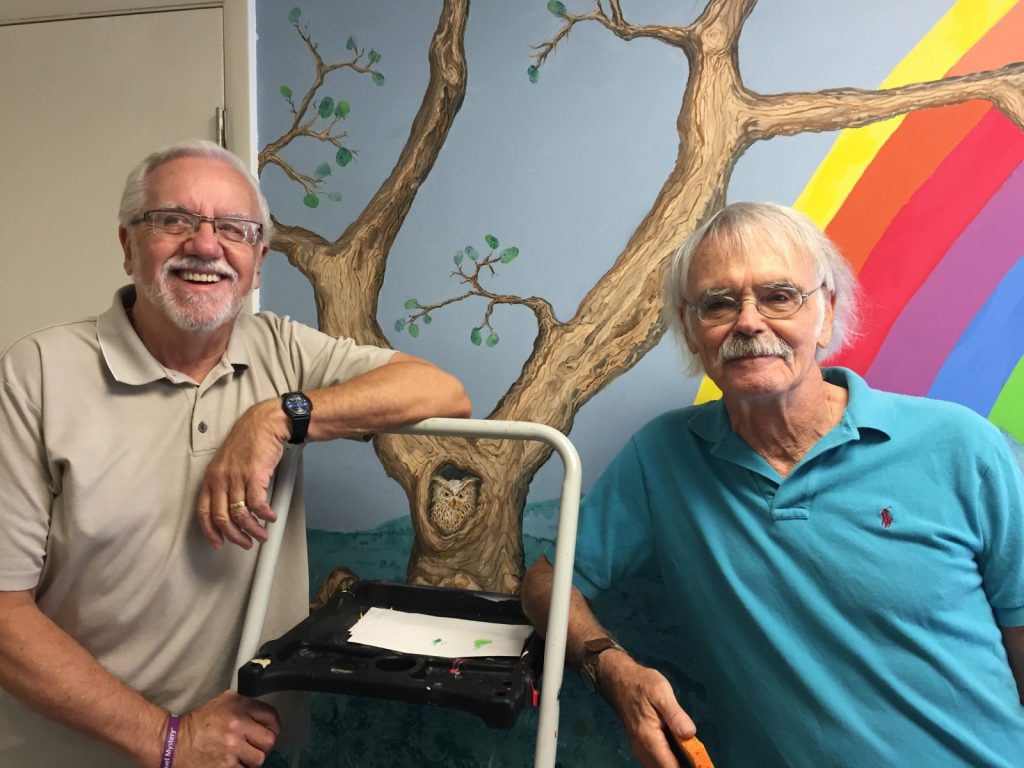 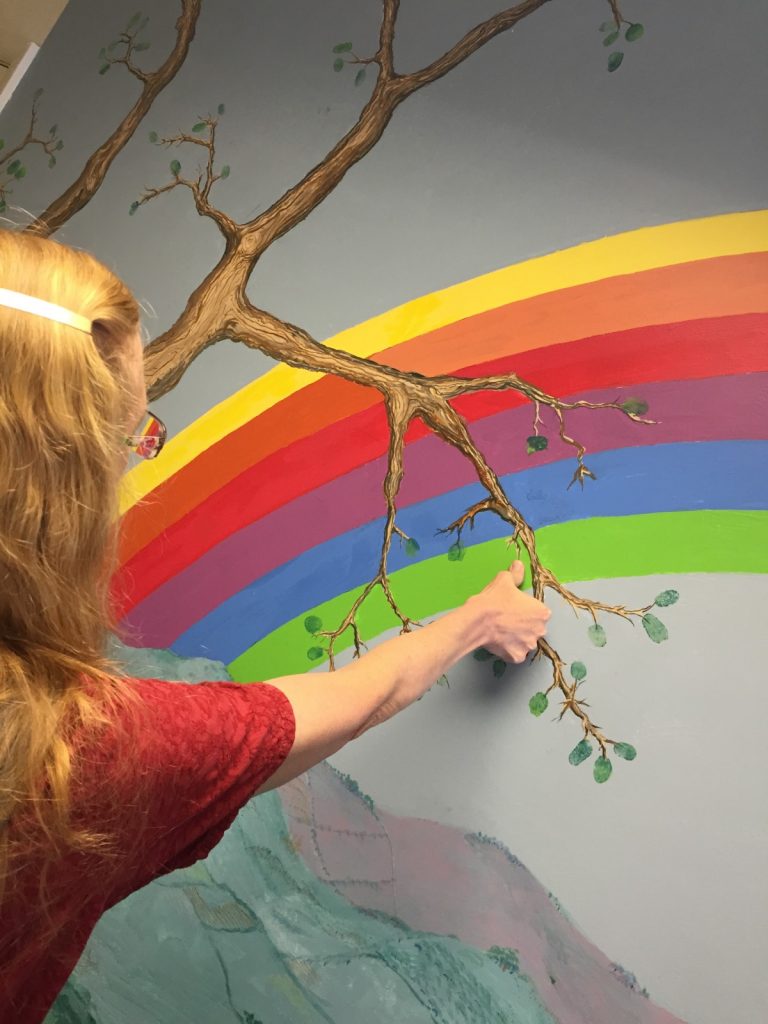 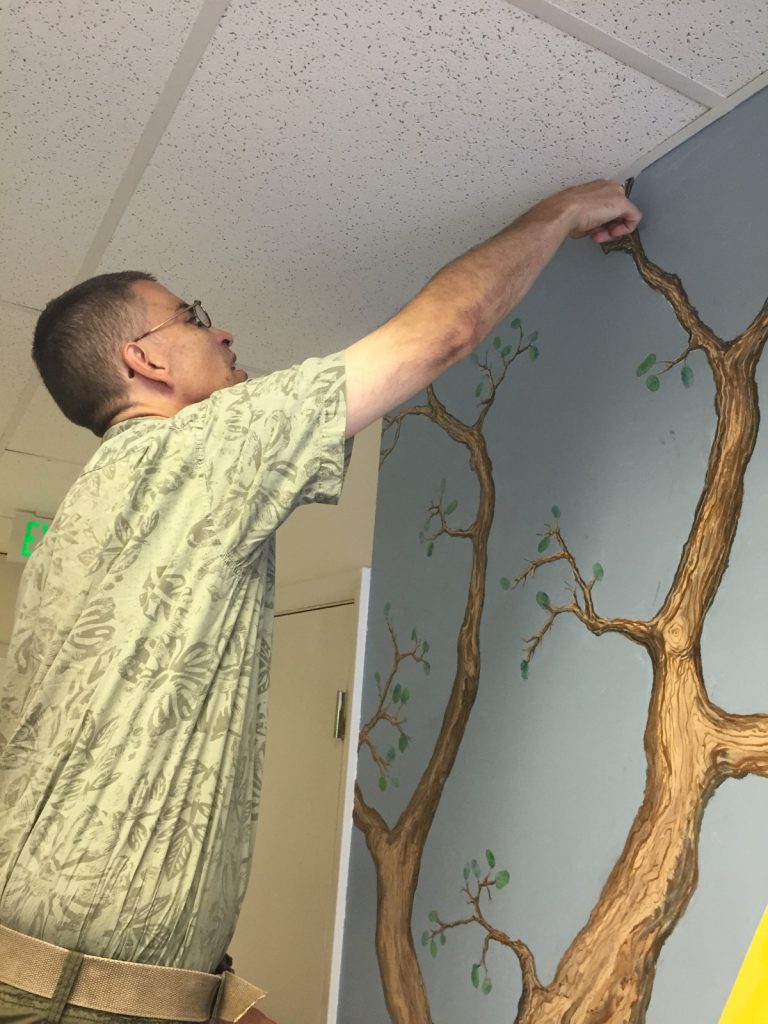 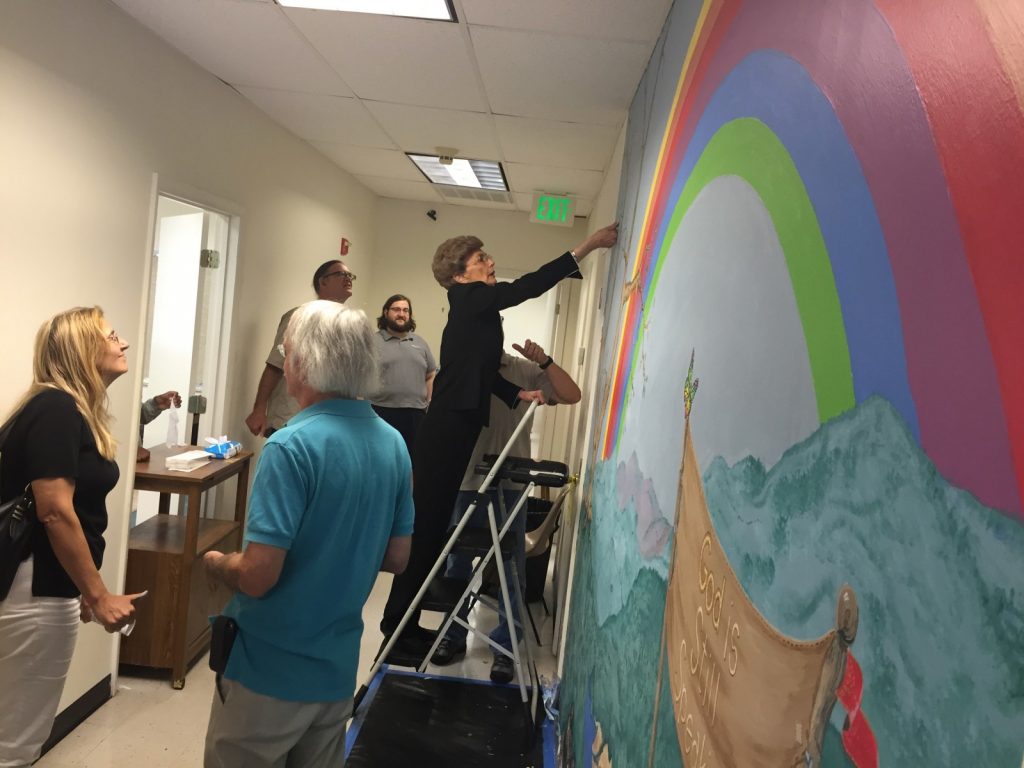 Young Thoughts from the Corner of Hillside and Crescent